IABC/Calgary appreciates all our members do to support our chapter. To show our support, we will be profiling and recognizing IABC/Calgary members who have reached major milestones. Get a feel for the variations in communications professionals who make up IABC/Calgary’s membership. You may know them!

Meet Sheila Foster, a senior communicator who has been a member of IABC for 25 years! 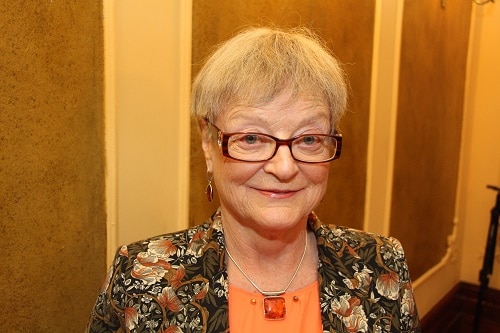 Sheila came into the communications field after spending over 20 years in business including: the automotive industry in London, insurance brokerage and employee benefit consulting in Toronto, and then the oil patch in Calgary for 12 years.

As sole proprietor and president of Target Communications, Sheila worked as an independent contractor for about 15 years. Sheila has worked as a generalist in the oil patch as well as the not-for-profit and public sectors. Some of her experience included working on a feasibility study for the first Alzheimer centres in Calgary, helping to organize Calgary’s first Palliative Care conference and writing her own column for an employee newsletter for Foothills (writing on sensitive topics such as sexuality and ageing).

Her volunteering work spans many areas
An IABC accredited member for 25 years, Sheila has worked on many committees including Operations Chair for the 1992 national conference, portfolio review, proctoring IABC exams, acting as a mentor, organizing judging teams for Gold Quill, Silver Leaf and local competitions. Although she travels for much of the year, Sheila still stops into many local IABC functions when she gets the chance. Sheila credits her success in the communications field to many excellent mentors and professionals she has been fortunate to work with at IABC.

What does Sheila do when she’s not communicating?
Sheila is local and national president of the Canada-China Friendship Association and has visited China from north to south, east to west, many times. Now that she is retired, she enjoys cross-country skiing for part of her winters then sets off to travel for the rest. Last winter she spent two months traveling in Vietnam, Laos and Cambodia. She also visits Europe regularly and as past president of a wine society, enjoys wine travels in particular. A diver for over 25 years, Sheila appeared in Cousteau’s 2011 Discovery Channel DVD on underwater French Polynesia.

Educational background
Sheila graduated from Mount Royal University (then college) Diploma program in 1992. While in the program she was a student member of both IABC and CPRS, being awarded an IABC scholarship in 1991. Upon graduation, she joined the Mount Royal College PR Advisory Committee, which she chaired for three years when the college was awarded the first Alberta Applied Degrees, including Public Relations.

From the IABC/Calgary board to Sheila, we thank you for continuing to support the Calgary chapter!