Kaitlyn Anderson has been a member of IABC since 2017. She first joined IABC’s Toronto chapter having recently moved to a new city and it was an opportunity for her to get to know fellow communications professionals across the industry. Her membership also helped her make new connections, learn new skills and give back to the community through volunteering with IABC.

With eight years of experience in communications, Kaitlyn has been working as a Communications Manager at Mattamy Asset Management for the last three years. Creative problem solving is the most important skill she has developed in her career. 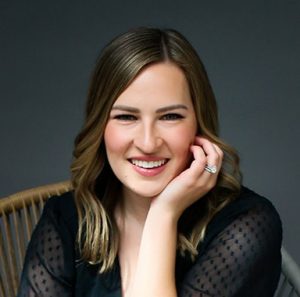 “Sometimes you hit a challenge and you might just want to throw your hands up and say I quit,” states Anderson. “But there is nothing more valuable than pushing through that sticky mess and embracing the suck. When you finally find the solution, it’s the best feeling.”

“Life, and your career, won’t be perfect,” she continues. “It’s about taking challenges head-on, doing your best in the moment, learning from the difficulties, and then appreciating, reflecting and celebrating when you’re on the other side. It’s a REALLY hard thing to do, that’s probably why it’s so rewarding.”

One of Kaitlyn’s professional accomplishments was creating WiN@Mattamy, an internal women’s initiative focused on developing, retaining and advancing women within Mattamy. When she joined Mattamy, her Executive gave her the opportunity to start the program from scratch.

“I’ve never told my Executive this, but taking on this special project scared the crap out of me,” says Anderson. “It was big, daunting and terrifying. But I ran with it, planned every single detail, evolved what didn’t work out, and put in the time to ensure it would be successful, and I am so proud of what we have accomplished.”

Kaitlyn considers Beverley McLachlin, the Canadian jurist and author who served as the 17th Chief Justice of Canada from 2000 to 2017, the most influential person in her career. Kaitlyn doesn’t know Beverley personally, but she admires her.

“What connects Beverley and me is that we both experienced our childhoods in the small Southern Alberta ranching community of Pincher Creek”, says Anderson. “Like many small towns, most high school graduates take the career path of a rancher, teacher, nurse or small business owner/employee. Her story of chasing after what she wanted and challenging roadblocks head-on with grace, kindness and confidence, has always inspired me to try to do the same in my own career.”

One of the most defining moments Kaitlyn has faced in her career was when she was laid off from her first full-time Communications Coordinator role at a tech start-up because the company owners decided to sell the company. Receiving the layoff letter was a devastating moment for Kaitlyn and took her a very long time to come to terms with the experience. However, she says “Looking back now, eight years later, I’m so glad it happened the way it did. It made me realize that decisions like that one, have to be made for the sake of the business and that it’s no reflection of you, your abilities or your dedication. What that experience taught me is that – like my CEO at the time did in that very moment –  it is your responsibility when delivering a message like that to do so with vulnerability, humility and respect.”

Kaitlyn advises communicators who are new to the field to not avoid tough conversations including giving honest, productive feedback.

“It is a difficult thing to do but not doing it is worse for everyone involved,” Anderson explains. “Also, if someone isn’t giving you the clarity or direction you need, ask for it” She also quotes and believes in Brené Brown’s saying: “Clear is kind. Unclear is unkind.”

Kaitlyn further believes that it’s a mistake to think that your opinion or perspective doesn’t matter.

“When you’re first starting out in your career, you might think that your perspective isn’t as important as those with more experience at the company, more experience in the industry, or more seniority,” she says. “Remember that you have a seat at the table for a reason. You were invited to participate for a purpose. You are doing yourself and others a disadvantage by not speaking up. The sooner you realize this, the more confidence and opportunities you’ll have.”

Kaitlyn recommends the book How to Be an Antiracist by Ibram X. Kendi and Me and White Supremacy by Layla Saad as well as Blinkist, a book-summarizing subscription service that condenses books into 15 minutes while still covers off the key themes and takeaways.

“I can feel everything and survive. What I thought would kill me, didn’t. Every time I said to myself: I can’t take this anymore — I was wrong. The truth was that I could and did take it all — and I kept surviving.  Surviving, again and again, made me less afraid of myself, of other people, of life. I learned that I’d never be free from pain, but I could be free from the fear of pain, and that was enough.”

– Glennon Doyle, from the book: “Untamed”